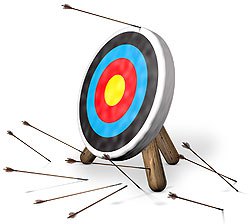 In a typical scenario, do you live in fear of punishment if you miss the target?

If you miss, you try to learn from it and don’t let it derail your love for it.

If someone tells you you’re a horrible example of an archer, you can admit that you’re not as good at it as you’d like but you smile as you tell them you’ll keep trying until you finally master it as well as you can in this lifetime.

It’s the Greek word that was translated into English as “sin”. It’s an archery term. Yes, archery. It means “you missed the target”. Oops.

If you love God and the way of Jesus and you’re trying to get better at it, you don’t live in fear of missing the target because your love propels you forward in the face of failure. Or as the apostle John wrote, “Perfect love casts out fear because fear has torment.”

So if you’re in a religious tradition that focuses more on fear of missing the target than a love for keeping at it until you improve, you may want to step back and think about this a bit more.

God is not an angry judge waiting for you to miss the target so God can punish you for the wretch that you are. God is NOT angry.

God is the patient father of the kid who demanded his inheritance early (i.e., “I wish you were dead! Give me my money NOW!”). The kid went on to squander all of it, yet the father kept scanning the horizon until he saw the kid return and he beat the shit out of him. Oops, no – the father EMBRACED him and threw a PARTY!

The biggest “sin” (missing the target) that Jesus came to “save” (rescue, restore, heal) us from is this:

Our flawed idea
that God is angry with us
and won’t accept us without
punishment, torture, even bloodshed.

Sure, in Hebrews it says “according to the law without the shedding of blood there is no remission of sins.” But did you see the first four words? “According to the LAW“. And who wrote the LAW? Men.

Specifically, Moses adapted it from what he learned as a prince at the best schools in Egypt – Hammurabi’s code, Enuma Elish, the Epic of Gilgamesh, and all those other topics more ancient than the Bible itself. Moses adapted them to his view of God. Others came along and made their own additions.

The only thing you need to be rescued from are erroneous thoughts about God.

You are loved.
You are accepted.
You are embraced.
You are free to miss the target and keep trying.