I read the following “Easter Monday” prayer from a Christian minister:

Grant, we pray, Almighty God, that we who celebrate with reverence the Paschal feast may be made worthy to attain to everlasting joys; through Jesus Christ our Lord, who lives and reigns with you and the Holy Spirit, one God, now and for ever. Amen.

It’s the kind of thing I typically read without thinking too much about. Today was different.

The core of this prayer is that God would make us “WORTHY to attain to everlasting joys.”

This is something I find in a lot of Christian prayers – asking God to do something that HE’S ALREADY DONE.

Like all these prayers asking God to “Have mercy on us, O Lord!” or to “Save us from our sins!” or whatever.

It’s ALREADY done. This is not something we should be asking for. It ignores the very position we are all in as children of God and as joint-heirs with Jesus the Son of God.

I mean seriously – considering that God has embraced us already, removed any barrier between us and God, called us his own, and ignored all offenses just like the father of the Prodigal Son did – why on earth would we pray to have things we already have? It’s insane. 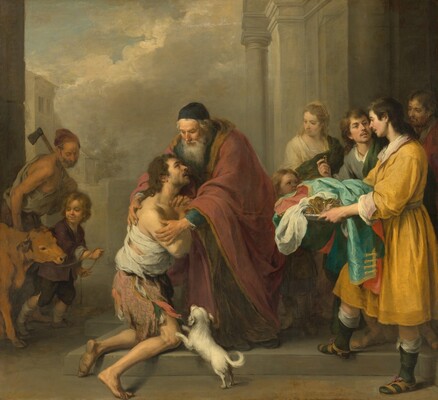 Think about it – how much sense would it make for the Prodigal Son to say to the father at the big welcome home party “Father, please have mercy on me!” DUDE! Your dad is throwing you a PARTY RIGHT NOW to show his lavish mercy – you’ve ALREADY been made “worthy”! Hell, you’re the GUEST OF HONOR!

Now I know really good, wonderful, God-loving people whom I respect but who get caught up into this kind of thing. Maybe like me they never really thought too much about it. It’s just part of the liturgy, part of the sing-song recitations that men invented in centuries past.

I get the same feeling when I hear people sing “worship songs” that cast us as “wretched sinners”, “worthless”, “unworthy”, “hopeless”, etc. Folks, that may have been the case in times past, at least according to certain theologies (not mine), but that’s NOT what you are right NOW. This is just language to make you focus on your guilt instead of your position as a loved, rescued child of God. And guilt is a manipulative tool of religion.

So recognize who you actually are right now before God, embrace it, rejoice in it, realize it’s a present reality in your life and going back to the pigpen of guilt and shame and self-loathing is a trip you no longer need to take.